GRAVEDIGGER in May PREVIEWS

Here’s the regular cover art for Gravedigger #1 by Rick Burchett! The May issue of the Diamond Previews catalog is out this Wednesday. Within its pages you’ll find, under Action Lab Entertainment / Action Lab: Danger Zone, the solicitation for the first issue of the Gravedigger miniseries, due out in July and containing part one of “The Predators,” by Yours Truly and the amazing Rick Burchett. Stay tuned for more details (including the product number, once I know it).

Here’s a look at the limited edition variant cover for Gravedigger # 1 by Dario Briton Carrasco, with colors by Ian Sokoliwski.

It was just a little over two months ago that the hardboiled crime comic that I created with artist Rick Burchett, Gravedigger, concluded its online serialization. At the time, I speculated that we wouldn’t have to wait long for the character’s return… and here it is.

Rick and I have just signed with Action Lab Entertainment’s “Danger Zone” mature readers imprint, to bring the two existing Gravedigger sagas – “The Scavengers” and “The Predators” – to both print and digital formats in 2015. The stories will be presented in a three-issue comic book miniseries format and as a digital edition on Comixology. Action Lab will be making their own announcement soon, and there will be more details revealed then.

The release dates haven’t been set yet, but you can be sure I’ll be plugging the hell out of the book when the time comes!

For the one or two of you who might find the information useful, I will be attending the BangPop show in Bangor, Maine (http://www.bangpopmaine.com/) September 20 and 21st. I *may* also be exhibiting at the Portland Comic Expo in Portland, Maine on October 26th… but that’s not definite yet. Stay tuned…

It’s been a while, so here’s a long-overdue look at the Atomic Pulp line of webcomics. If you’re reading this, then you’re almost certainly aware that I write, and publish online, three weekly, serialized webcomics (did I mention that they’re free?): Gravedigger, Perils On Planet X, and Femme Noir.

• Gravedigger is more than halfway through its action-packed second continuity, “The Predators.” Over the last couple months we’ve had some scheduling issues due to various circumstances on both my part and multiple-award-winning artist/co-creator Rick Burchett’s, but it looks like we’re back on track now, with new installments every Monday. Once “The Predators” wraps, we plan to move right into the third – and biggest – Gravedigger caper, tentatively titled, “The Abductors.” Like “The Predators,” this one is brand-new, and has never been available in any format before.

• Every Wednesday sees an episode of Femme Noir, drawn by my pal, Joe Staton, who is currently shaking up the funny pages as the artist on the Dick Tracy newspaper strip. At the moment, we are re-presenting previously-published stories while we gear up to produce a new graphic novel. 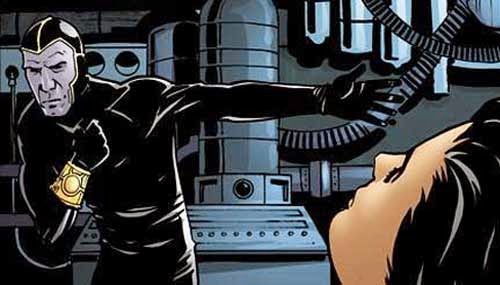 • The most popular of the Atomic Pulp webcomics (in terms of monthly traffic) is Perils On Planet X, which updates on Fridays. This swashbuckling interplanetary adventure, which is illustrated by the immensely talented Gene Gonzales, and colored by Ian Sokoliwski, has updated like clockwork for more than a year now, with no missed weeks. We’re about a third of the way into Chapter Three of the first storyline, “Hawke Of Terra,” and looking toward the future. We’re working on plans for a collected volume (and maybe some crowdfunding to pull it off) of this first “Book,” as well as discussing future stories.

• My collaborators and I appreciate all comments and feedback from our readers. We also appreciate every link and referral, because the more readers we have, the easier it is justify keeping them going. So thanks, to everyone who’s helped spread the word… and if you haven’t read them yet: why not?